017 Workflow and How To for "Master of Illusions"

Here is a quick workflow overview for my latest painting. 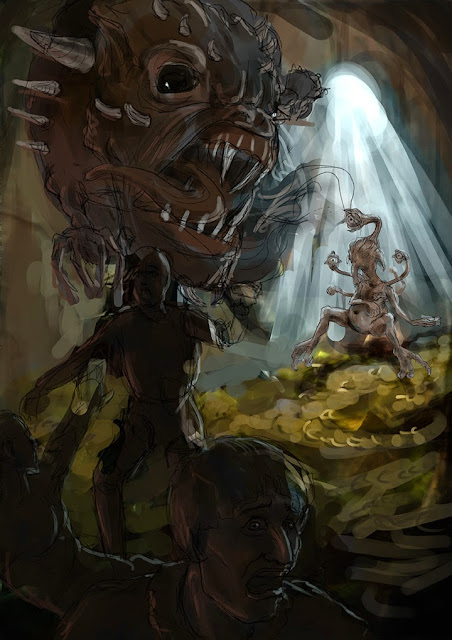 1. I had a very clear idea of what I wanted to paint. A creature conjuring an illusion to drive away some kind of treasure hunters.
I layed down a quick sketch for the composition, laying emphasis on foreground, midground and background in the values (from darker in the FG to lighter in the BG).
I first painted this in black and white, then layed a color layer on top and refine on a normal layer again. I also decided in this stage about my lighting.
The main light is the blueish-green coming from the opening in the ceiling, creating some rimlight on the foreground characters. A second lightsource is coming from the left off screen and is orangish-reddish. 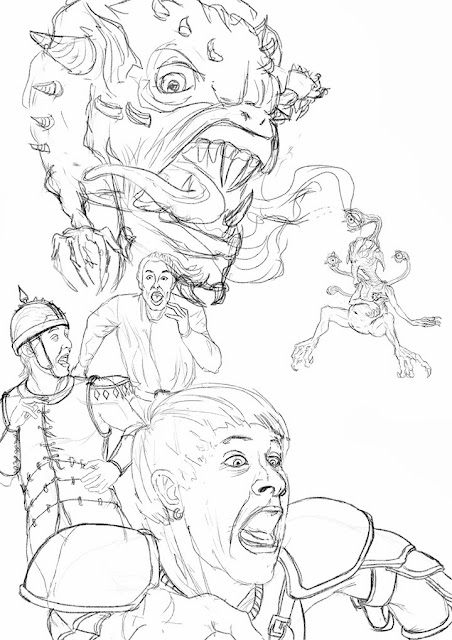 2. I refined the line sketches especially for the foreground characters and started to design out their armor/clothing 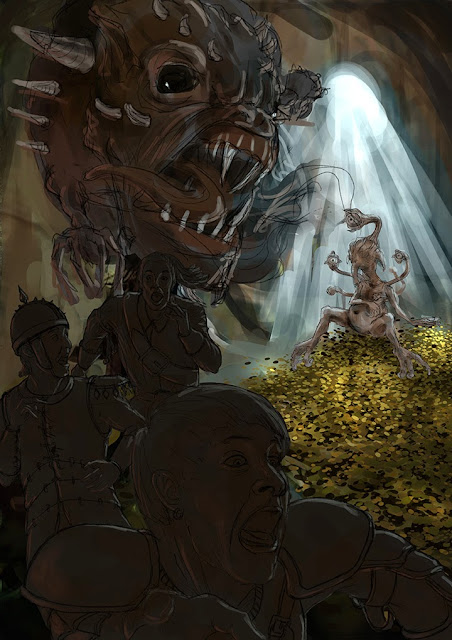 3. I added some crude treasure coin pile with a quick brush I made. The brush is only ovals and circles of varying grey to black values set to scatter. Painting in B&W first and laying a color layer on top.
I completely filled the foreground characters with a brown tone underneath the line sketch and started to add light from both lightsources. I used a standard hard round brush and a standard soft brush. 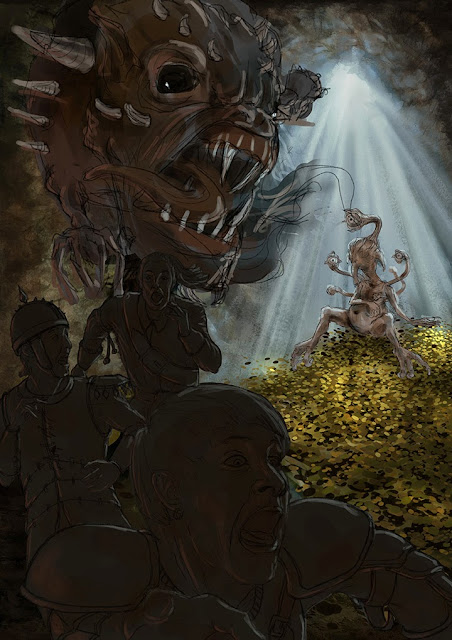 4. I started to refine the background more, painting the light and rocks of the cave with a chalk brush. 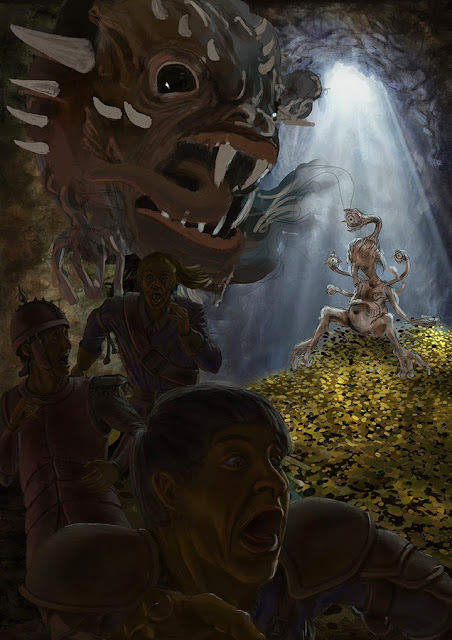 5. Here I put a layer on top of the lines, starting to flesh out the illusion monster with basic, mostly opaque colors.
I also put a color layer on top of the foreground chracters to distinguish the clothing and hair from the skin. Then I put a normal layer on top to start painting out the lines and adding details. Still hard and soft standard brushes.
For the skin, I first painted with a hard brush, then using a blender brush (smudge tool with texture brush and spacing turned off on about 20% opacity) to gently blend in some areas where the transition would be softer, leaving some areas of harder transitions! 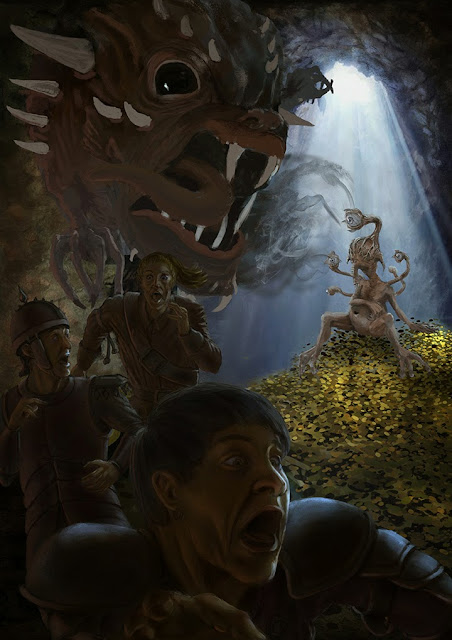 6. Fleshed out the creature on the treasure pile and adding some smoke with a smoke brush.
Made some minor corrections to the illusion and detailed that more adding in more light form both sources.
On the foreground characters, I added an adjustment layer to correct the values in places to make them lighter.

Here´s an interesting method, I recently discovered to control value and color:

- Add a color layer and a luminosity layer on top of your image.
- Next add a new layer on top of everything and fill it with black. Set blend mode to saturation and you see your image in B&W. You can turn that layer on and off to check values.
- To correct color without influencing values, paint on the color layer while the black saturation layer is off.
- To correct values without affecting colors, turn on the black saturation layer, so that you get your b&w image and paint on the luminosity layer, picking values from your now b&w image.

I find that this gives me really good control over the image and rendering process.

The blue rim light is a layer set to divide (I never use that blend mode, but in this case, it worked ) 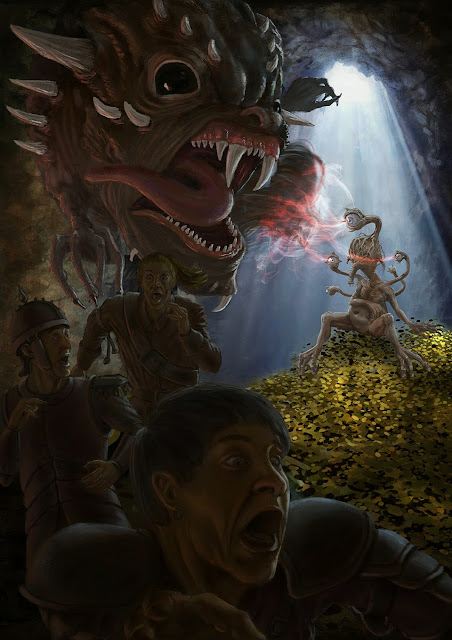 7. Refining details on the illusion, adding some glow on the red magic effect, the gold and blue light with a color dodge layer. 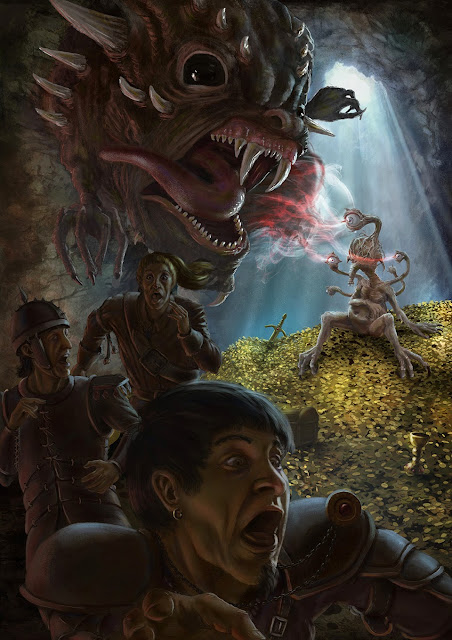 8. Refining of the illusion by adding a slight phototexture and painting over it, working it into the image.
I changed the colors with a color adjustment layer to a more blueish-green and detailing out the treasure pile. Adding some treasure pieces and giving volume to the coins by painting in a dark rim on some of them
The foreground characters get more detail and using a soft round brush, I work out the skin. I also added some purplish tones around the eyes and a more red tone on the nose, switch hard, soft and blender brush, not using dodge or a color dodge layer 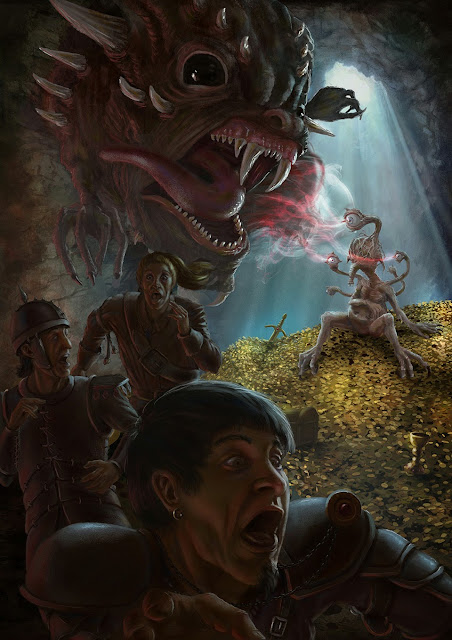 9. Finally I added some curve adjustment layer, a color balance and hue layer to correct the colors (especially to bring out the red light source on the left) Remember that those adjustement layers have mask layers! Use them to get your adjustments to the spots you really want altered, not to change the whole image!
Painting in a stronger, detailed rim light and adding a slight noise filter and the painting is done.